It is always nice to have a helping hand in the classroom and even better when it is from a known face. This week 2B had Henry S return to St Thomas to be as that other great Thomas – Thomas the Tank Engine — would say, ‘really useful’.

Henry was last here in 2017 where he was taught by Mr Dahdah in Year 4. Now in Year 7 at St Aloysius, he returned as part of his College Arrupe service. He and Mr Dahdah begun the day by demonstrating to the class how to conduct a debate by undertaking a mock one on whether children should donate some of their pocket money to charity. Henry’s strong arguments and ability to listen to alternate view and then counter was evident for the children to see.

He also busied himself creating a Multiplication and Division Kahoot for the children to play. By the noise levels in the class, the quiz was a resounding success and a great way to consolidate learning in this area of maths which the Year 2s have been doing over the past month. Henry, a keen numbers man, also led a fun treasure hunt lesson on arrays to further assist in conceptual understanding of multiplication.

The day was capped with a little Frisbee fun at the bowling club. Thank you to Henry for his time – the children enjoyed his visit. Thank you to Ashley Mundy and Alec Willis for also assisting in classrooms and the school office. 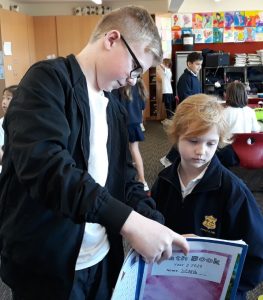