This could be made more challenging by changing how many points each is worth, so children could count up in twos or threes etc… 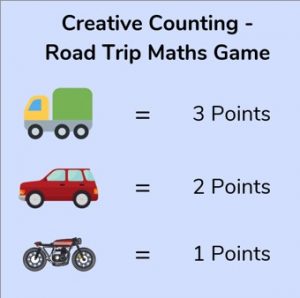 This game can be easily adapted for any age.

Think of a number for the children to guess. Players have to ask questions that have a yes or no answer in order to identify the number.

For younger children they could be given a range within which the number falls, they call out a number and are given ‘higher’ or ‘lower until they reach it.

A more challenging version of the game would be to give players a range of clues, e.g. If the number was 50, they could give the clues ‘It’s an even number’. ‘it’s divisible by 2, 5, 10 and 25’, ‘it’s equal to two quarters’. You could also require that the questions the children ask are of a similar nature eg ‘is the number divisible by 3?’ , ‘does the number end in a 7’ etc.

An alternative to guessing the number, in this game players have to try and guess the rule.

Players give a number whilst the person leading the game applies a mystery rule and tells the players what the new number is.

This is a fun strategy game, played with two or more players, who take it in turns to count up from 1.

Each player can call out one, two or three consecutive numbers, before it moves to the next player to carry on counting up.

The player who ends up saying ‘21’ is out of the game. The game then continues, counting back up from 1 to 21, until there is only one person left. They are the winner.

Have a restful and relaxing holiday.